Hi-Hog has developed a safe and reliable bison handling system based on decades of experience and feedback from bison ranchers and vets.

When compared to cattle, bison tend to react earlier, at greater distances from the stimulus, and with greater speed, and vigor. For this reason, Hi-Hog's bison handling systems and chutes vary considerably from their typical cattle handling systems.

When designing bison facilities the following bison behaviors should be considered:

To handle bison with a minimum level of stress we have developed a safe and reliable bison working alley that accommodates bison’s desire to be with their herd mates, provides enough room for the bison to turn around and shields their view from distractions. 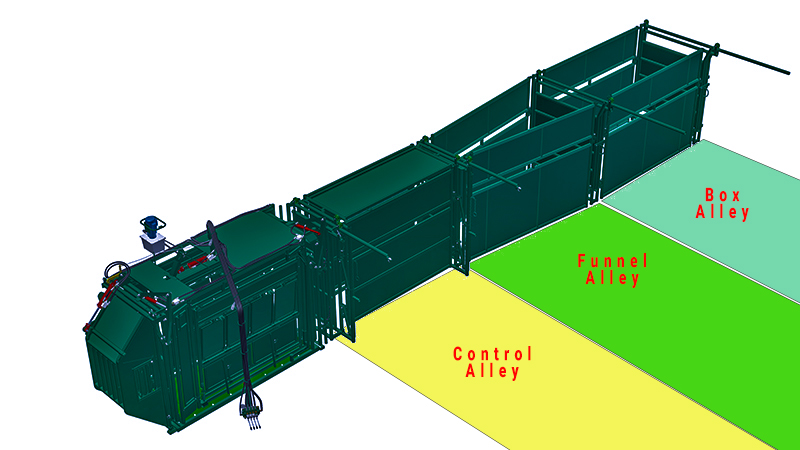 How to work Hi-Hog’s bison alley

Simply bring a small group of bison into your working alley with all the sliding gates open (keep the gate at the single file alley closed for now). Your bison should be moved quietly and calmly (read more about how bison behavior impacts handling)

NOTE: To work animals efficiently, with minimum stress for animal and handler, do not over-fill your pens.

As your bison spread out in the available space you can divide the group into smaller groups by sliding the 5’ wide solid sheeted rolling doors across the alley. The box alleys should hold two or more bison while the funnel section is designed to hold one animal. Do not isolate an animal in the funnel section until the squeeze chute is clear.

NOTE: Bison do not like to be isolated. For this reason you should never isolate your bison unless you are going to be moving them, or treating them immediately.

As soon as you have an animal isolated in the funnel section you can open the gate for the optional control alley or directly into the bison squeeze chute. Your bison should be allowed to move from the funnel alley section to the squeeze chute with minimum delay.

Once the squeeze is empty again you repeat the process with the objective of moving the isolated animal as quickly as possible out of the funnel section into the bison squeeze chute. For more details see the Resources section at the bottom of this page.

NOTE: we recommend introducing your working alley to your bison well before you need to work your bison. Be sure to lock the squeeze and all the gates in the open position so your bison can explore the alleys full length without risk or threat. This practice can significantly reduce animal stress and increase handling efficiency. For more tips on handling bison see Hi-Hog's introduction to bison behavior.

Hi-Hog's working alley is a combination of an:

The width and length of the alley sections depends on the number of animals you are processing at one time. Working small groups of bison quickly will minimize bison stress and increase overall efficiency.

For best results your bison group should not be brought into the alley until the system, including squeeze chute, is clear of bison and you are ready to begin processing.

The Entry alley, Box alley and Funnel alleys are created by combining a range of Hi-Hog bison panels and bison gates. Hi-Hog's panels all use the same modular connector system to allow flexibility when combining different panel styles.

The entry alley acts as the first section of alley connecting your corrals to your box alley. It usually has an 8’ to 12’ wide gate at the corrals and narrows over its length to a width of 5’. The primary purpose of this section of alley is to give your bison a large inviting opening from the corrals.

Hi-Hog’s 5’ wide box alleys can be built in a range of alley lengths. The 5’ wide alley provides enough width for the bison to turn and move freely. The box sections should be designed to hold 2 or more bison at any time.

The solid sheeted 5‘ wide rolling doors (item 2190) can be opened/closed quickly and quietly thanks to the contoured nylon wheels. The rolling doors sheeted sides provide a solid finish your bison will respect (and not attempt to run through).

The sheeted alley side panels help to calm your bison as the sheeted sides block views of potential threats outside of the alley.

Additionally, there is no floor in the box alley so as long as the ground provides secure footing your bison should remain calm and content.

The sheeted panels also include a narrow slot that can be used by the handler to calmly work the flight zone.

The funnel section is normally 8′ to 10′ in length and is designed to hold one animal for a brief period.

If desired you can replace one of the alleys side panels with a frame with gate to allow for sorting.

The adjustable control alley is a 32” wide box alley that is designed to ease the transition from a box alley into your bison squeeze chute.

NOTE: if your natural ground conditions are muddy or slippery your bison may hesitate as they may become concerned about their footing. Paddock slabs can be installed to provide better footing and control mud.

Because the control alley does not provide enough width for your bison to turn around, we have included a roof panel over this section to stop your bison from attempting to climb the walls or jump out.

The control alley section includes a side exit so you can sort an animal out of the alley, or assist a distressed animal.

The sheeted side panels include a narrow open slot which allows the handler to work the flight zone of your bison. 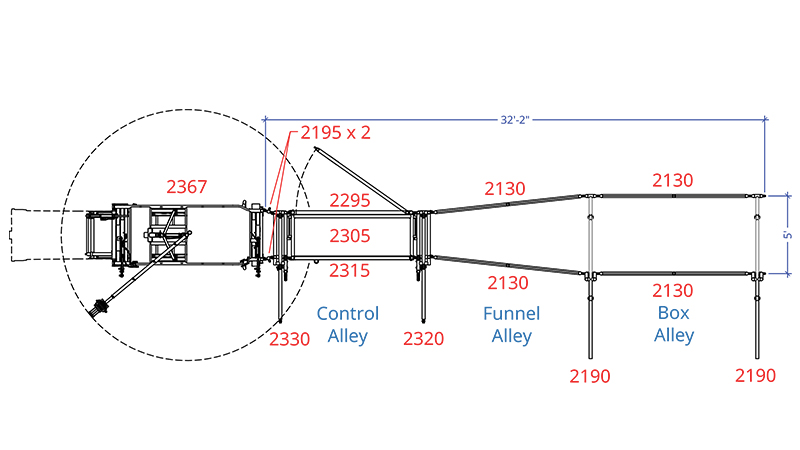 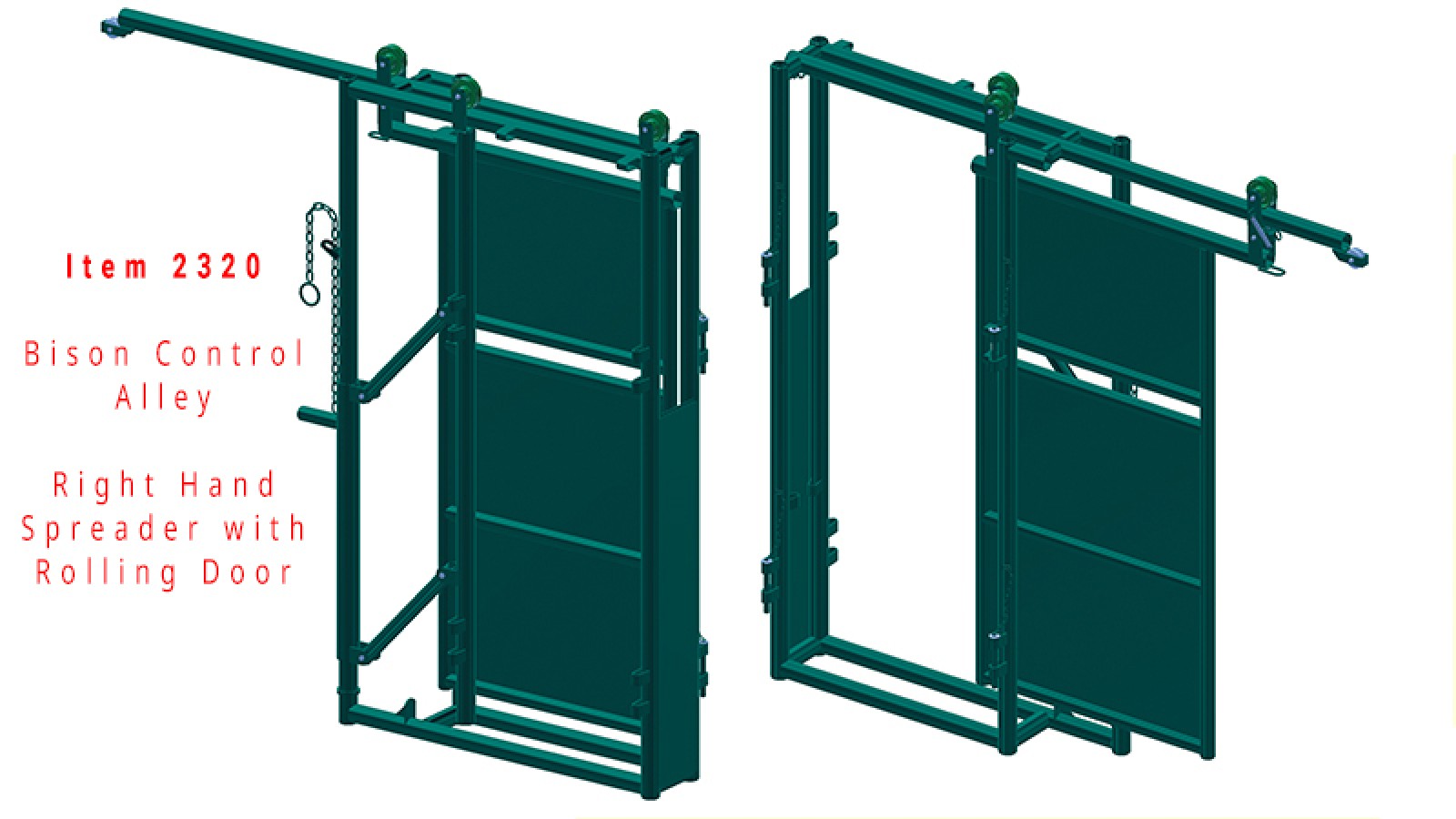 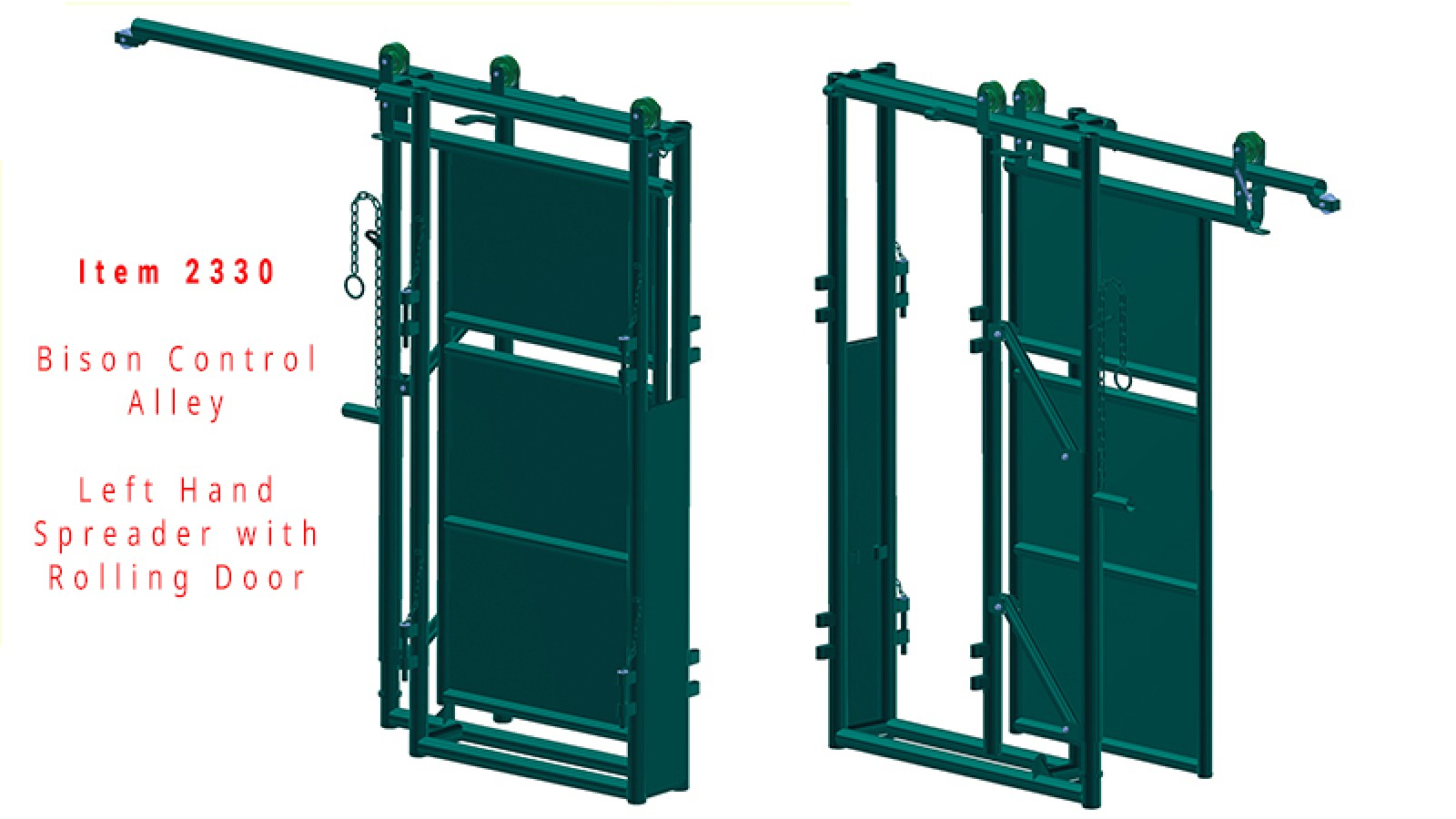 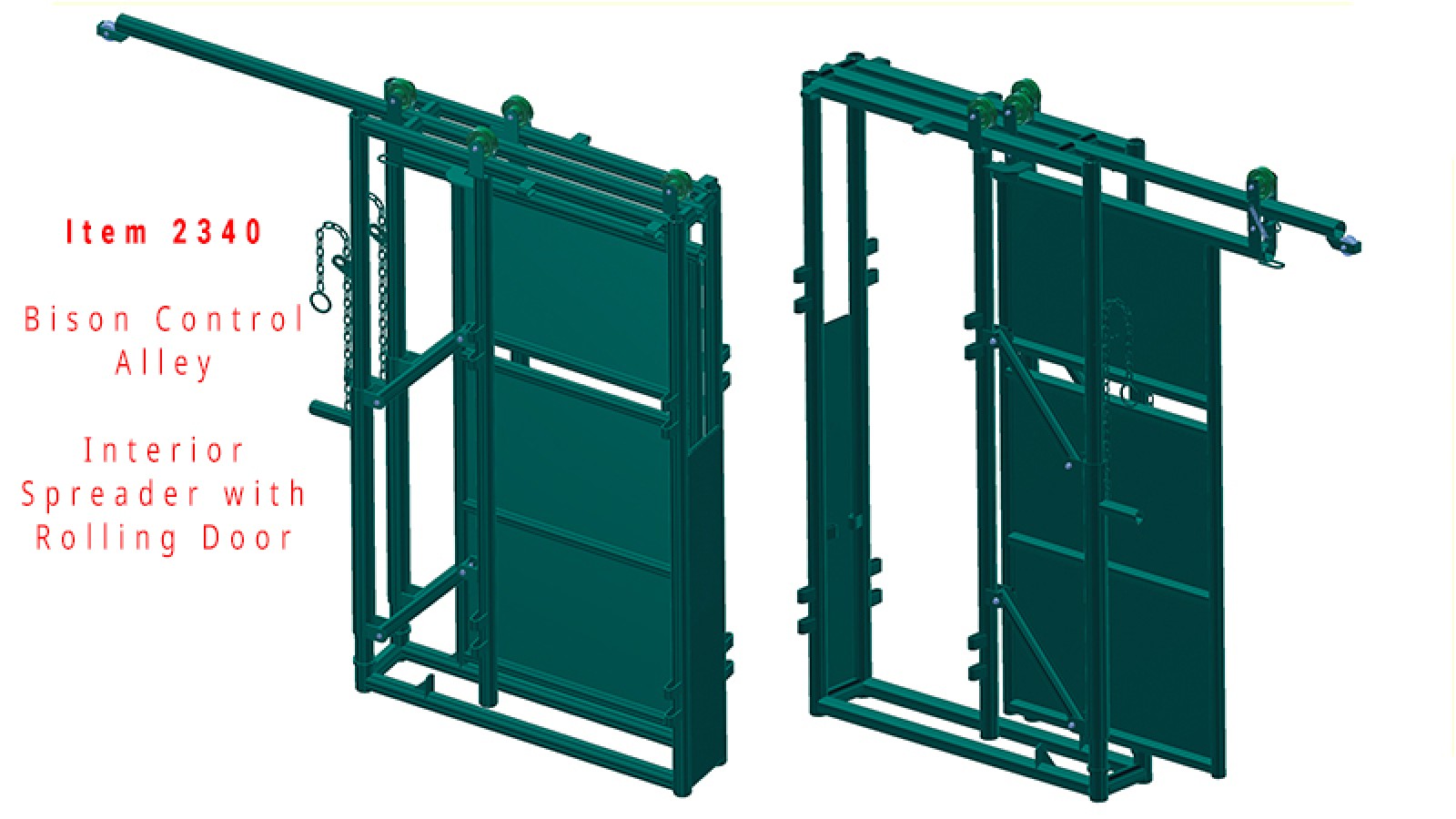 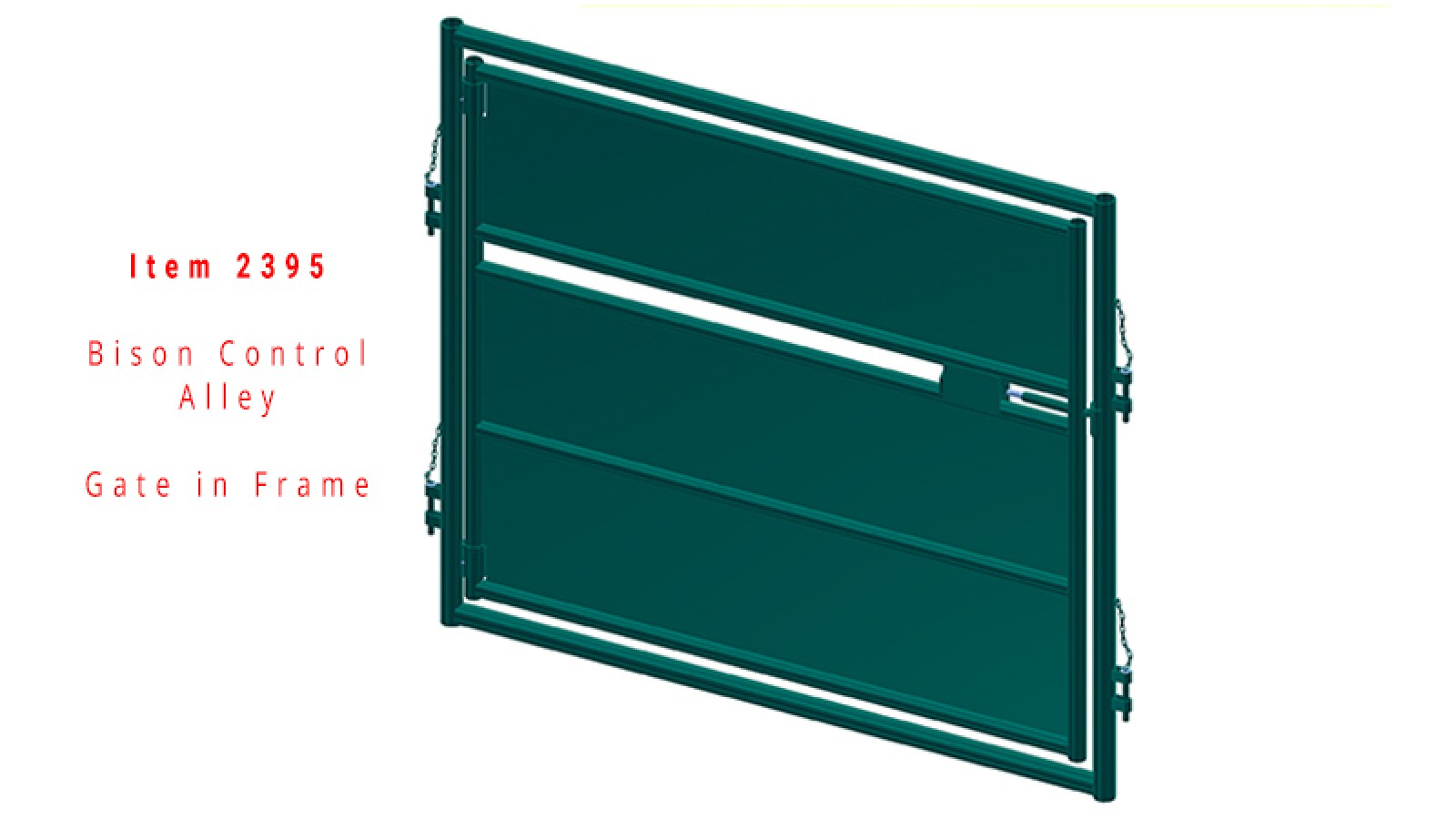 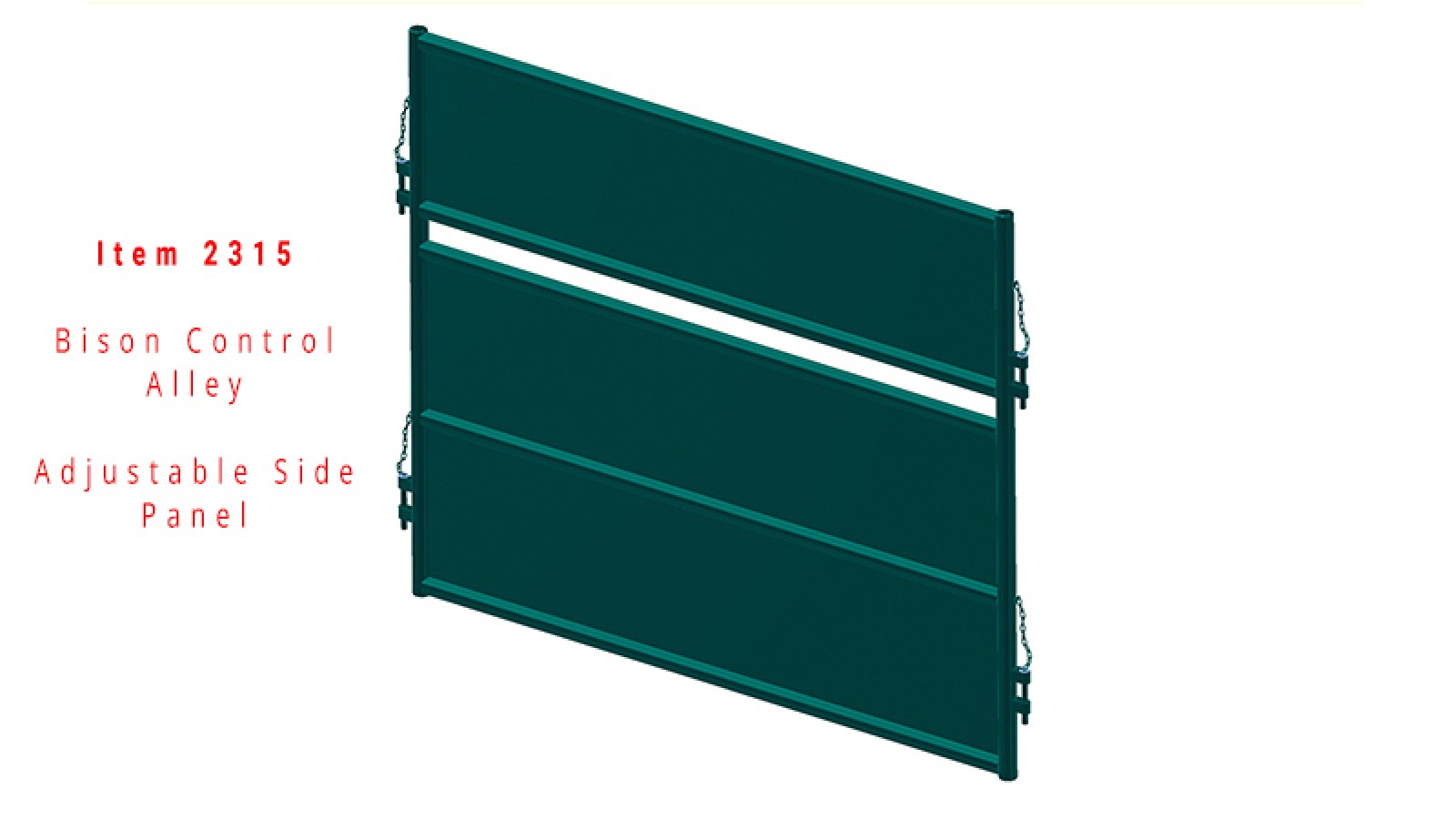 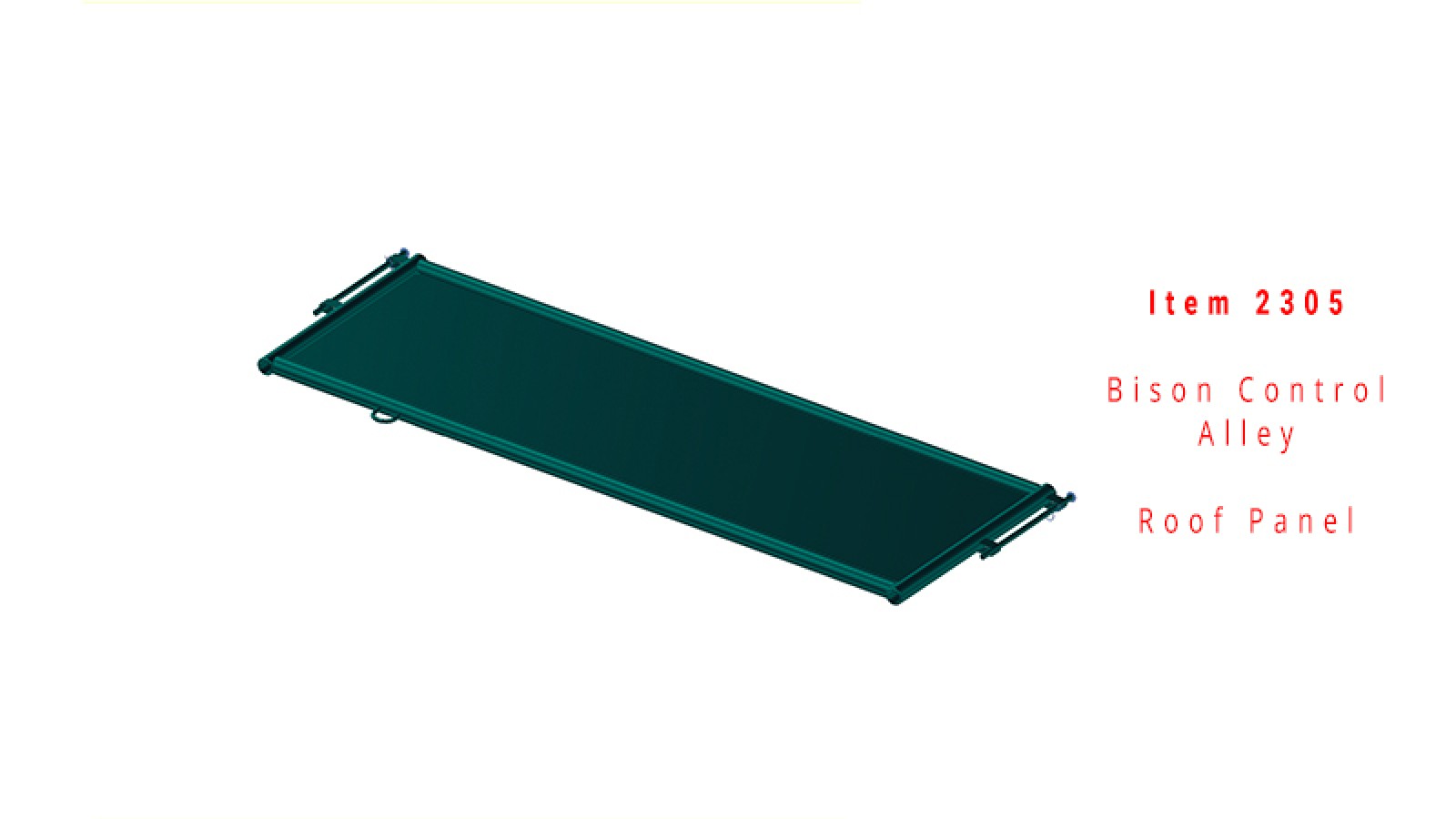 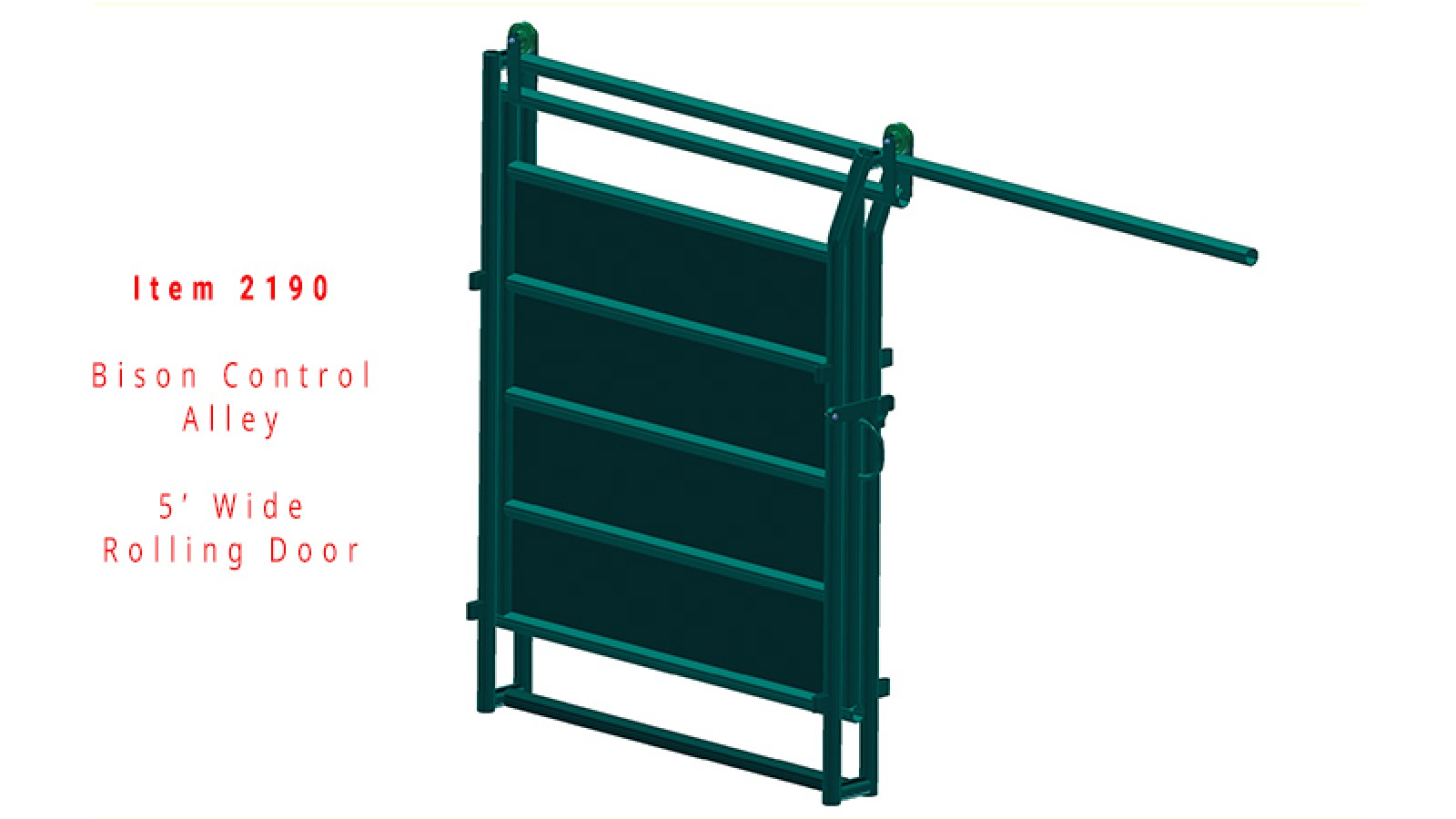 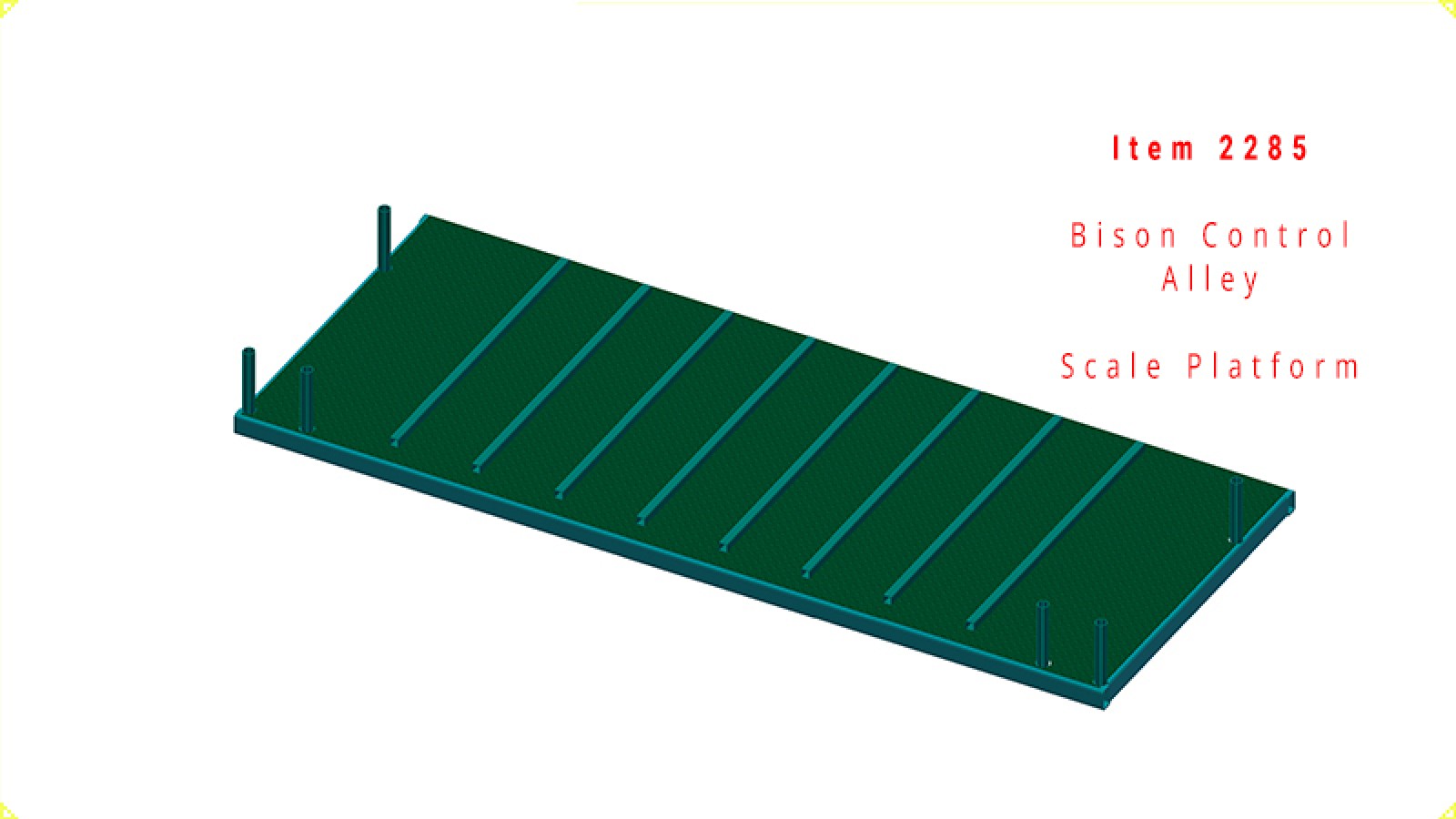 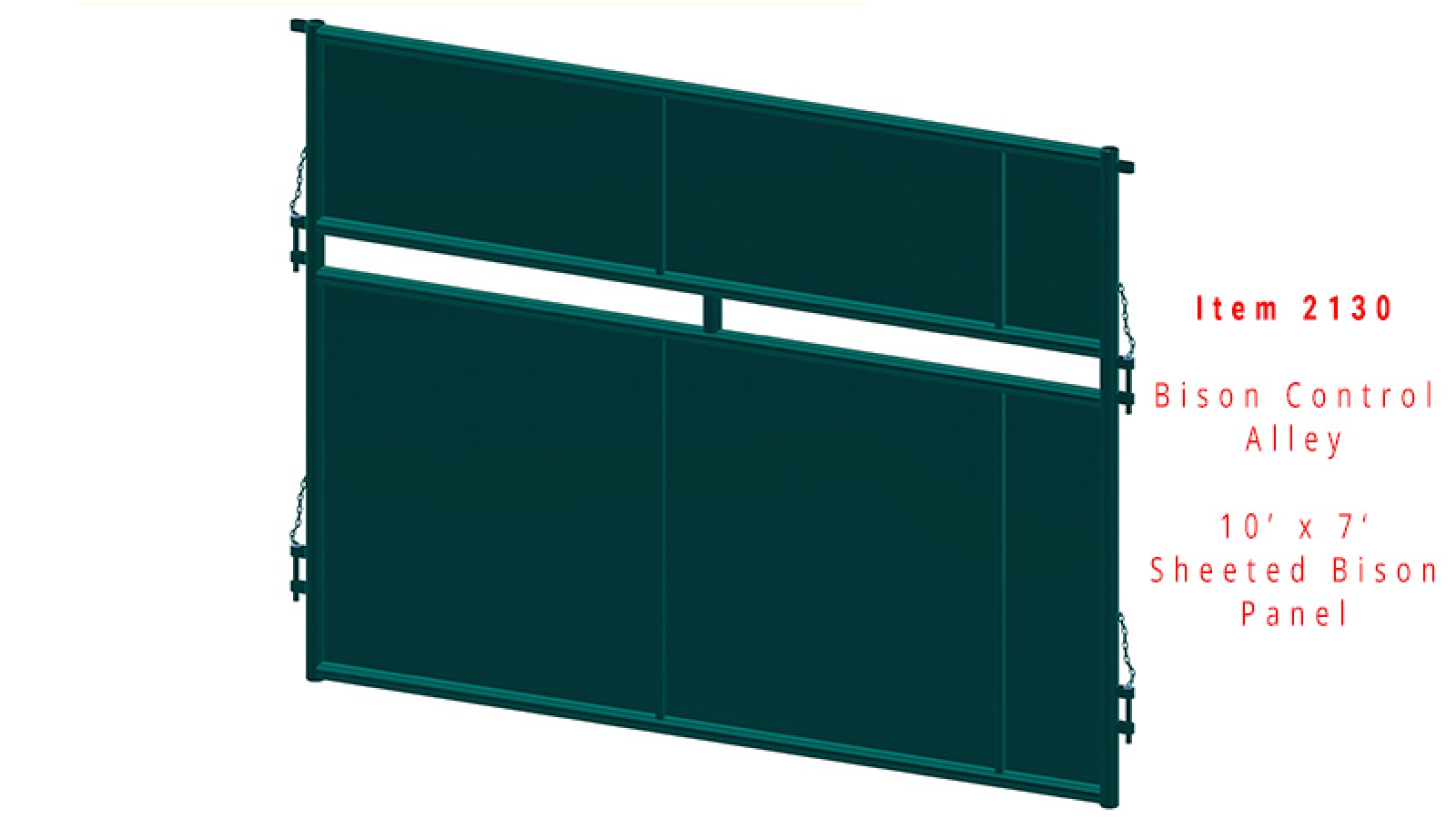 Hi-Hog also offers an optional scale platform for the control alley section so you can weigh your bison before they enter the bison squeeze chute. 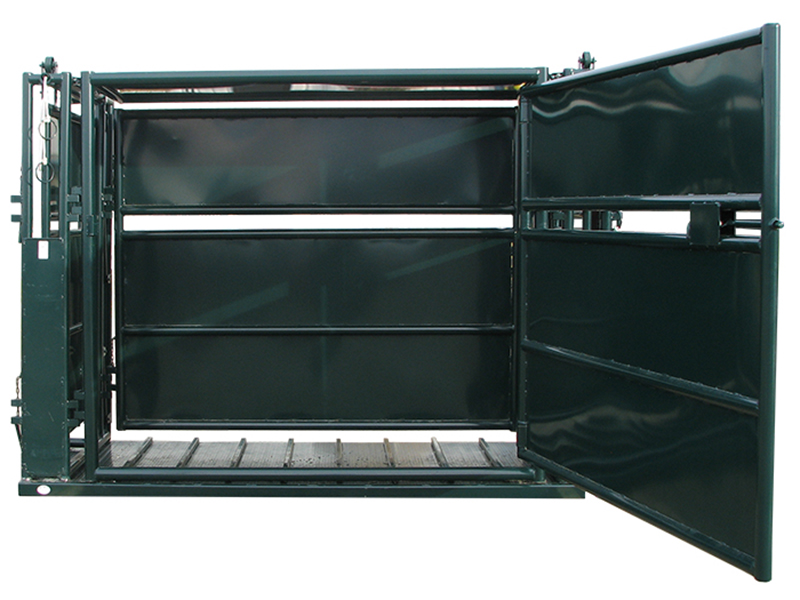 Please be aware that you can also mount the bison squeeze chute directly on load bars (load bars not provided).

NOTE: bison do not like to be isolated from their herd mates. When they are isolated they can shut down and become non-responsive or they can become very aggressive in their attempt to return to the herd. For best performance, your bison should be isolated for as short a period as possible.