One of the key concepts that will help you work your cattle more efficiently is a better understanding of the flight zone. The flight zone is another way to describe an animal's personal space. 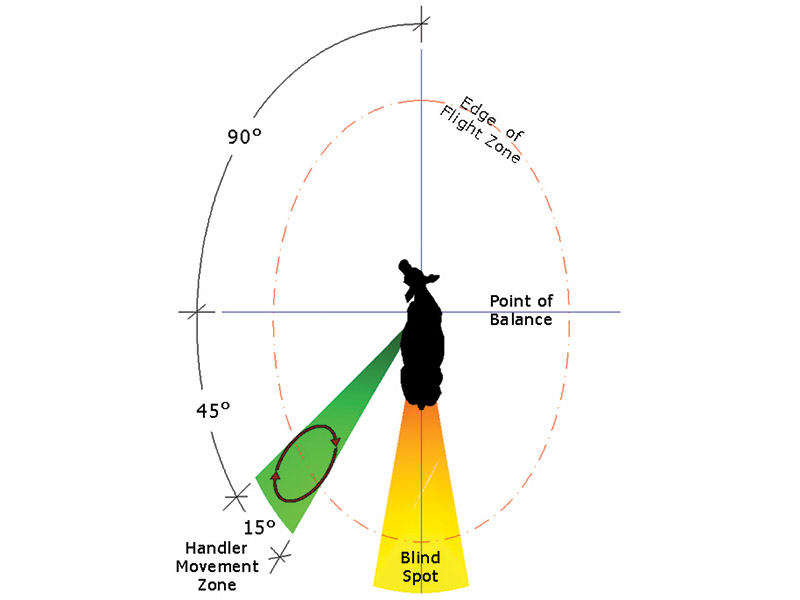 With this understanding, a handler can use their knowledge of the flight zone to encourage their livestock to move where the handler wants their cattle to go (this discussion is relevant for all herding livestock such as bison and sheep).

The size and shape of the flight zone is determined by the individual animal’s comfort with the handler, as well as the animal’s current level of excitement or stress.

To work the flight zone with a minimum of stress the handler needs to build a relationship of trust with their livestock, not fear. If you are using big sticks, cattle prods, yelling, quick movements, or dogs, you are using fear to move your livestock.

If your handling techniques are based on fear then you are contributing to your livestock stress and are likely diminishing your potential return.

Low stress stockmanship begins with building trust with your livestock.

The Point of Balance

Begin by building trust with your animal. They want to keep their eyes on you. If you slowly approach the animal head on you can watch their response. If they raise there head, or begin to move, you have entered into their flight zone. Back off and let them settle. They will keep their eyes on you. They will be watching you to see what you want them to do. You can now use small simple movements to encourage your animal to voluntarily go where you want them to go.

Your movement is important. Cattle don't see perspective very well so it is important that you don't stand perfectly still. With that said all you need to do to have presence is to slowly rock your body. Pay close attention to the eyes, head, ears and tail of your animal. The more you practice this, the better your connection will be between yourself and your animals.

Working the point of balance in an open area:

Working the point of balance in a confined alley:

Counter movement describes the tendency of contained livestock to move in the opposite direction of the handler. As the livestock handler walks from the head of the animal towards the tail of the animal they will cross the animals point of balance and the animal will move forward.

Working livestock in a handling system with a better understanding of the flight zone.

Applying your understanding of counter movement, you can adapt your movement in relation to your handling system to benefit from this behavior. Start where you want your livestock to end up (such as at the squeeze chute). As you walk from the squeeze chute along the side of your working alley you will pass by the point of balance of each of your animals in the alley. As you pass each animal they will move forward towards the squeeze chute (and away from you). When you reach the beginning of the alley you loop back, out of the flight zone, and start again at the squeeze. 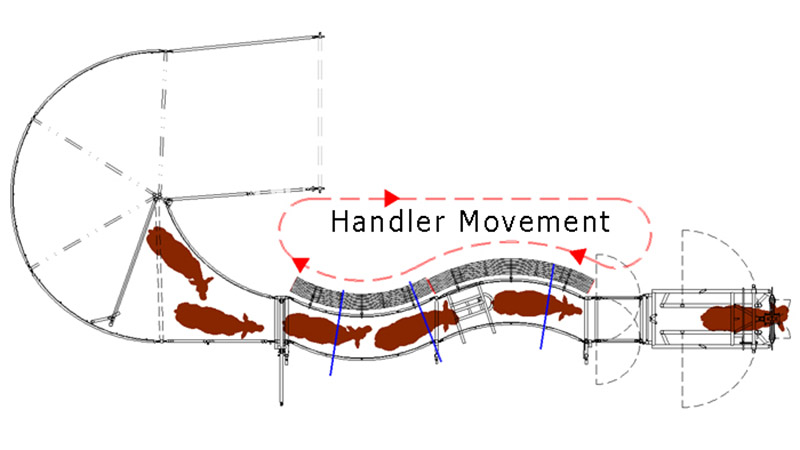 Counter movement on a sample S-Alley

Counter movement on a sample U-Alley

Counter Movement - Circle behind - Working livestock in a pen

When a handler enters a pen holding livestock, the  livestock will first move away from the handler. As the handler continues to move into the pen the animals will turn and travel in the opposite direction past the handler and finish by trying to turn in behind the handler.

You can use this behavior to move your livestock more easily out of your pen. This is the basic principle used for working a Bud box and it works well for sorting livestock as well. 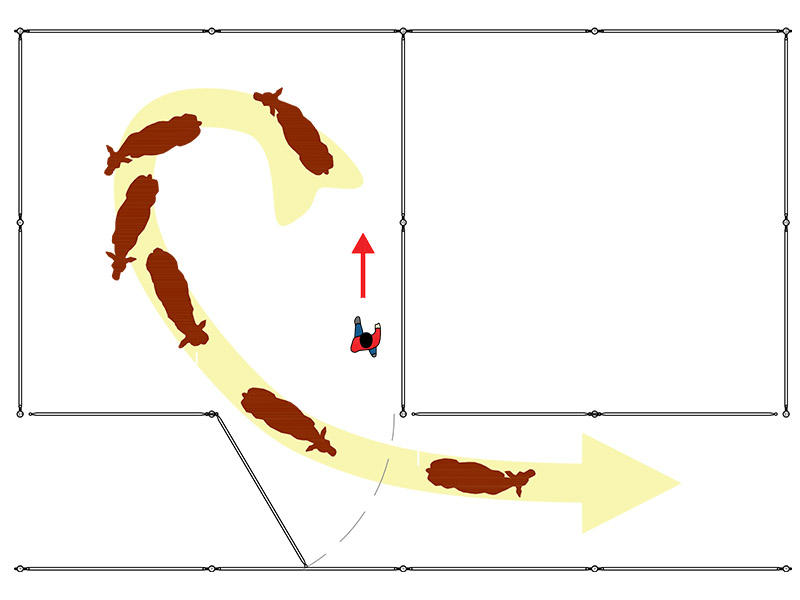 Livestock circle around handler to exit 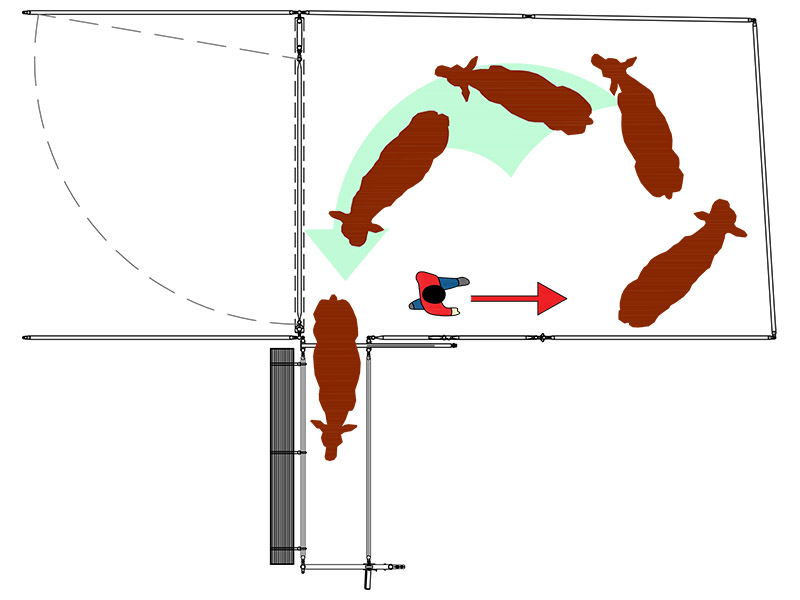 Handler movement in a Bud Box

With a bit of practice you can work your livestock very efficiently simply by changing your position compared to the animal you are trying to move.  Understanding the flight zone will help you move stock with less effort and lower stress for all involved.

NOTE: Be aware that some livestock may become catatonic (unresponsive) if they are over stressed. If this occurs, the handler should remove themselves from the animals flight zone. If your animal remains unresponsive continue removing stressors until your animal is feeling comfortable to move on its own. For more information on the types of things that stress your cattle read Hi-Hog's description of cattle behavior.